The conventional nitrification and denitrification process for nitrogen removal utilises autotrophic bacteria in an aerobic environment to convert ammonia to nitrite then to nitrate. This is done by ammonia oxidising bacteria (AOB) and nitrite oxidising bacteria (NOB) respectively. Heterotrophic bacteria in an anoxic environment then convert the nitrate back to nitrite before converting the nitrite to nitrogen gas. This process relies on the addition of a lot of oxygen (energy) and carbon (BOD), it also produces a lot of sludge or volatile suspended solids (VSS).
The Modified Ludzack-Ettinger (MLE) process is designed to use nitrate produced by the aeration zone as an oxygen source for hetrotropic bacteria in the breakdown of raw wastewater in the anoxic basin. The influent wastewater return sludge from the clarifier, and nitrate-rich mixed liquor pumped from the effluent end of the aeration tanks are mixed together. The influent wastewater serves as the carbon source for bacteria, return activated sludge from the clarifier provides microorganisms, and the anoxic recycle pumps provide nitrate as an oxygen source. The anoxic basin is mixed, but not aerated.
The (MLE) process employs the conventional nitrification and denitrification process for nitrogen removal mention above.

The MLE process is relatively simple to control, maintaining the DO level in the aerobic zone is usually sufficient. The nitrate recycle and subsequent use of nitrate as an oxygen source reduces the oxygen requirements. The process will do more than just convert nitrogen compounds into nitrogen gas, the fact that it will produce a larger quantity of biomass than the nitrite shunt process means that soluble carbon, nitrogen and a small amount of phosphorus compounds will be converted into solid biomass which will, in turn, be separated in the clarifiers.

In the MLE process, the anoxic tank is normally smaller than the aeration tank and the nitrate recycle flow is normally up to 5 times the raw wastewater flow.
The aeration tank is used to remove the last of the soluble BOD, and to convert the ammonia to nitrate.
In general, this process is only suitable for handling inlet nitrogen concentration of less than 100 mg/l.

If the correct conditions can be created to favour the AOBs and inhibit the NOBs the nitrate stage of the process outlined above can be skipped. This is called nitritation-denitritation or more commonly as nitrite shunt (NS).
Although the biological denitrification takes place without extra oxygen being delivered, delivery of oxygen to the anoxic reactor at a reduced rate of the demand (50% to 70%), also referred as to aerated anoxic, leads to the process performance improvement. The NS may be followed by a second tank, where final simultaneous nitrification-denitrification (SND) polishing takes place to reduce ammonia, oxidised nitrogen and COD levels below licence limits. 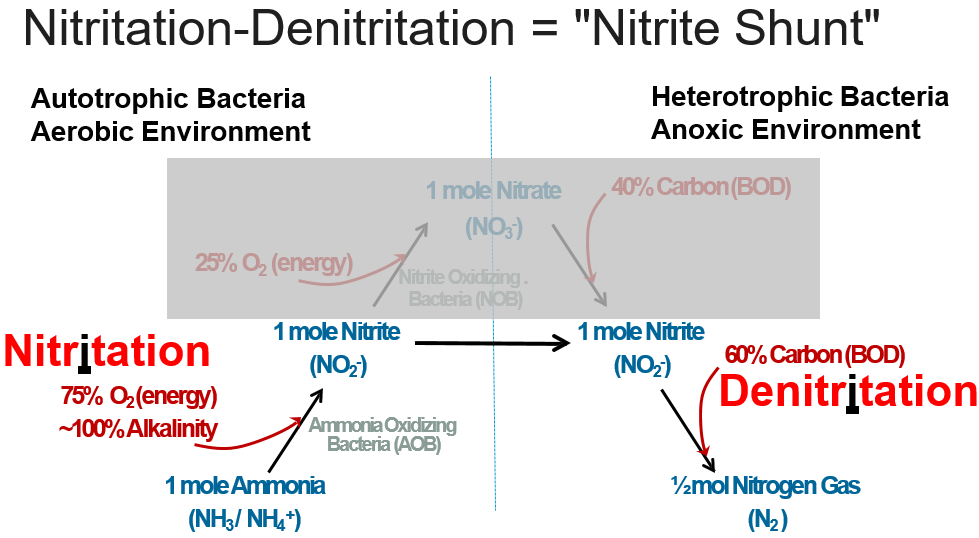 The nitrite shunt process requires more advanced process controls to create the optimum conditions for the AOBs and to, therefore, get the best ratio of AOB to NOB. The advantages listed above are very attractive especially if the raw wastewater is pre-treated using anaerobic digestion which removes a large portion of the carbon to produce biogas a renewable energy source.

The Nitrite Shunt and De-ammonification

It should be noted that it is also possible to convert ammonia direct to nitrogen gas using nitrite and the presence of Anommox bacteria. To date, this has been developed successfully by a number of specialist companies but again only for sidestream flows.
Theoretically, the nitrite shunt step and the de-ammonification step can be combined to allow removal of ammonia without the consumption of any carbon or biodegradable COD and with virtually no excess sludge production. This combined process step is available from a number of specialist companies. Patented and branded processes include:
• The DEMON SBR Process by DEMON Switzerland
• The SHARON Process by Sweco and Delft University
• The DeAmmon Process by Purac/Lacekby
• The ANITA Mox Process by Veolia
• The Cleargreen Process by Infilco Degremont
It is, however, possible to use standard process design and engineering to create conditions that will achieve the nitrite shunt process without the growth of Anommox bacteria.

As a minimum two main reactor tanks and a final clarifier are required to operate in series as shown.

The process performance relies on creating conditions that ensure the nitrite oxidising bacteria (NOB) are suppressed so that nitrite is not converted to nitrate in the first reactor.
Control parameters that help to suppress the growth of NOB bacteria in the nitrite shunt reactor are as follows:

Dissolved Oxygen: This should be maintained below 0.5 mg/l in general.

Reactor liquid temperature: The process is better suited to reactor operating in the range of 20 to 35 degrees C.

Total Ammonia Nitrogen: Residual total ammonia nitrogen (TAN)(sum of ammonium and ammonia) should be maintained above 1.0 mg/l as the AOB growth rate drops if the substrate ammonium levels are too low.

Transient Anoxia: Alternating anoxic and aerobic conditions are required and can be created by turning aeration equipment on and off and by the use of multiple raw wastewater feed points that can be opened and closed. Oxidation Ditches may be used to naturally create anoxic and aerobic zones.

Solids Retention Time (SRT): Low SRT can assist with the washout of NOB.

Ammonia-based aeration control: This is the simplest form of process control

AVN (ammonia versus nitrate) control: This is a more advanced form of process control. It comprises the following; An aerobic duration controller, A dissolved oxygen controller to maintain the DO at a set point during the aerobic period, An ammonia sensor and an oxidised nitrogen sensor. The ratio of ammonia to oxidised nitrogen is maintained constant. Set points are set for timers and sensors to ensure satisfactory operation. 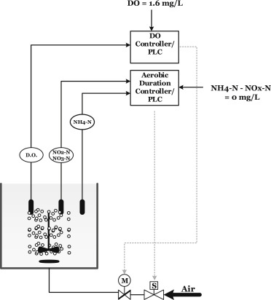 Quantitative real-time polymerase chain reaction analysis.
These techniques can be used to confirm that the AOB bacteria are relatively abundant and that the NOB bacteria are suppressed. (pPCR).

While many new plants may benefit from a complete Nitrite Shunt and De-ammonification process step, many new and existing plants will benefit from the application of nitrite shunt process and downstream polishing reactors only.
It is especially suitable where the readily biodegradable COD to Nitrogen ratio is between 4.0 and 2.0 and where the wastewater temperature is above 20 °C.
There are many existing plants with multiple reactors tank that can be modified to improve the level of nitrogen removal.
Typical existing Industrial WWTPs include:

This website uses cookies to improve your experience while you navigate through the website. Out of these cookies, the cookies that are categorized as necessary are stored on your browser as they are essential for the working of basic functionalities of the website. We also use third-party cookies that help us analyze and understand how you use this website. These cookies will be stored in your browser only with your consent. You also have the option to opt-out of these cookies. But opting out of some of these cookies may have an effect on your browsing experience.
Necessary Always Enabled
Necessary cookies are absolutely essential for the website to function properly. This category only includes cookies that ensures basic functionalities and security features of the website. These cookies do not store any personal information.
Non-necessary
Any cookies that may not be particularly necessary for the website to function and is used specifically to collect user personal data via analytics, ads, other embedded contents are termed as non-necessary cookies. It is mandatory to procure user consent prior to running these cookies on your website.
SAVE & ACCEPT